A Florida teenager is convinced that he spotted the Loch Ness monster while on vacation in Canada, 4,000 miles away from the lake where the mythical creature supposedly lives.  Matthew D’Amico claims to have captured the elusive aquatic beast on camera while swimming in Banff National Park in Alberta, Canada.

The university student, 17, saw a ‘long neck protruding out of the water’ and quickly managed to snap pictures.  He revealed: ‘All the hairs on my body went up as I became astonished at what I saw in the water. ‘I recently took a trip to Alberta, Canada, for my sister’s sweet 16th birthday to see wildlife. ‘It was when admiring the beautiful view in front of us when I spotted the strange creature.

‘After an hour hiking, we took a break on a hill with a great view of Bow River where my sister and I saw what appeared to be a prehistoric animal swimming.’ He said he subsequently pointed out the ‘creature’ to his sister and both of them stood in disbelief at what they saw. ‘I immediately took photos, and after evaluating them, my sister and I responded with the same conclusion – the Loch Ness Monster.  ‘I made no hesitation to rush taking out my camera and capture photos.

‘My sister ran off to the rest of my family to bring them while I stayed and took photos.’  Reports of Loch Ness date back to sixth century Scotland – but the existence of the creature was given credence after a photograph taken in 1934 by Colonel Robert Kenneth Wilson was published. 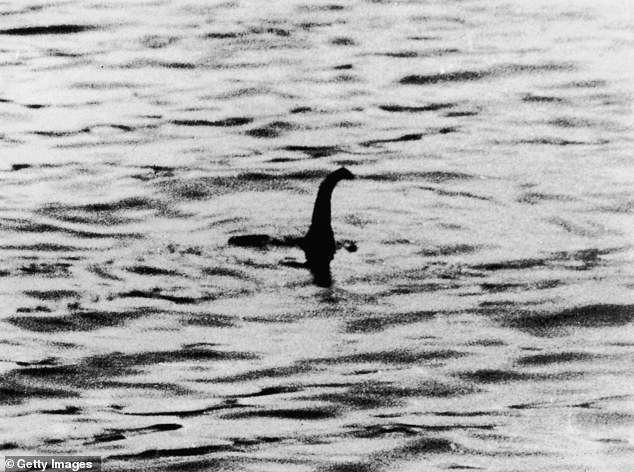 The existence of the creature was given credence after a photograph taken in 1934 by Colonel Robert Kenneth Wilson was published. However the image was later exposed as a hoax 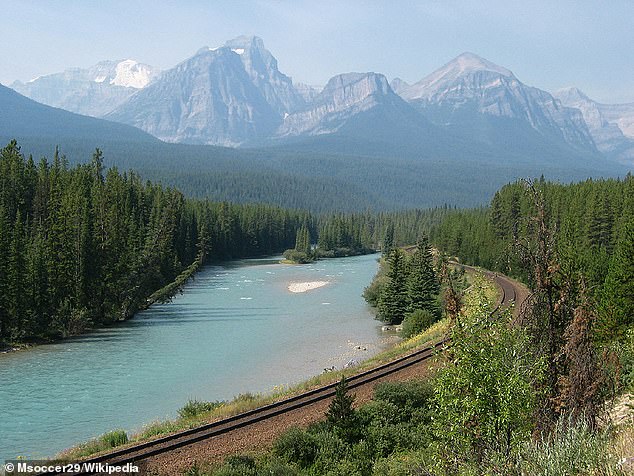 The university student, 17, saw a ‘long neck protruding out of the water’ and quickly managed to snap pictures at Banff National Park in Alberta, Canada, (pictured)  The image was later exposed as a hoax by one of the participants, Chris Spurling, who, on his deathbed, revealed that the pictures were staged.D’Amico added: ‘I have what I believe to be the most accurate photos of the Loch Ness Monster that has been captured since the 1933 photo.

‘Sadly, my parents and sister did not make it quick in time before the creature disappeared below the surface.  ‘But when I showed the photos to my family, they also were astonished and thought the same thing. It definitely looks like the Loch Ness Monster.’

The river where D’Amico snapped his pictures is about 4000 miles away from Loch Ness in Scotland. Sightings of the Loch Ness Monster have set new global records in recent years. There were 11 accepted sightings in 2017 which were the highest this century. According to Google, there are around 200,000 searches each month for the Loch Ness Monster, and around 120,000 for information and accommodation close to Loch Ness. The monster mystery is said to be worth $38 million to the local region.

In Canadian folklore, Ogopogo or Naitaka (Salish: n’ha-a-itk, “spirit of the lake”) is a lake monster reported to live in Okanagan Lake, in British Columbia, Canada. The most common description of Ogopogo is a 40 to 50-foot-long (12 to 15 m) sea serpent resembling an extinct Basilosaurus or Mosasaurus. Ogopogo has been allegedly seen by First Nations people since the 19th century. According to skeptical author Benjamin Radford, these First Nations stories “were not referring to a literal lake monster like Ogopogo, but instead to a legendary water spirit”.

The origins of the name Ogopogo remain unclear. According to historian Mark M. Orkin, “According to canon”, the creature received its name “on a night in 1924 when the strains of an English music-hall song were first heard in the city of Vernon, British Columbia”. Orkin cites the following lines from the song:

His mother was an earwig,
His father was a whale;
A little bit of head
And hardly any tail—
And Ogopogo was his name.

Orkin, however, notes that “A somewhat different form of the song appeared in the Vancouver Province in 1912, August 24, 1926. According to the DC the name was first applied in 1912.” Additionally, the creature may sometimes be referred to by the pet name Oggy.

In 1946, a sighting is claimed to have occurred at an Okanagan Mission beach. This event was supposedly witnessed by about thirty cars of people who all claimed to have seen the same thing. In 1968, Art Folden filmed what is claimed to be footage of the alleged creature, showing a large wake moving across the water. A computer analysis of the footage concluded it was a solid, three-dimensional object. Folden noticed “something large and lifelike”; in the distance out on the calm water and pulled out his home movie camera to capture the object. An investigation conducted by Benjamin Radford with Joe Nickell and John Kirk for the National Geographic Channel TV show Is It Real?, in 2005 revealed that the object Folden filmed was indeed a real animal but its size had been greatly overestimated. It was probably a water fowl or beaver too far away to be identified.

In 2011, a cell phone video captured two dark shapes in the water. A suggested explanation is that the video shows two logs. Radford analyzed the video for Discovery News and concluded that “The video quality is poor and the camera is shaky, but a closer look at the 30-second video reveals that, instead of one long object, there are actually two shorter ones, and they seem to be floating next to each other at slightly different angles. There are no humps, nor head, nor form; only two long, darkish, more or less straight forms that appear to be a few dozen feet long. In short, they look a lot like floating logs, which would not be surprising since Lake Okanagan has tens of thousands of logs harvested by the timber industry floating just under the lake’s surface.”

In September 2018, there were reportedly three sightings, one of which was described as a giant snake that was about 15 m (49 ft) long