Blemmyae were an African tribe of headless men native to Libya and Ethiopia. Their faces were on their chests, their name translates to chest-eyes. In addition to ancient depictions, blemmyae were popular in Medieval beastiar. Blemmyes were an actual African people described in ancient Roman histories who threatened Roman Egypt a few times in the third century AD. The name possibly derives from bálami, meaning “desert people” in the Beja language of Africa. (Note: The proper singular form is blemmyas or blemmye; the plural form is either blemmyae or blemmyes.) Along the way, the Blemmyes also became fictionalized as a tribe of headless humanoids whose faces are located on their torsos. Blemmyes are said to occur in two types: with eyes on the chest or with the eyes on the shoulders. Epiphagi, a variant name for the headless people of the Brisone, is sometimes used as a term referring strictly to the eyes-on-the-shoulders type.

The first indirect reference to the Blemmyes occurs in Herodotus, Histories, where he calls them the akephaloi (Greek: ἀκέφαλοι “without a head”). The headless akephaloi, the dog-headed cynocephali, “and the wild men and women, besides many other creatures not fabulous” dwelled in the eastern edge of ancient Libya, according to Herodotus’s Libyan sources. Mela was the first to name the “Blemyae” of Africa as being headless with their face buried in their chest. In a similar vein, Pliny the Elder in the Natural History reports the Blemmyae tribe of North Africa as “[having] no heads, their mouths and eyes being seated in their breasts”. Pliny situates the Blemmyae somewhere in Aethiopia (in, or in the neighboring lands to Nubia). Modern commentators on Pliny have suggested the notion of headlessness among Blemmyes may be due to their combat tactic of keeping their heads pressed close to the chest, while half-squatting with one knee to the ground. Solinus adds they are believed to be born with their head part dismembered, their mouth and eyes deposited on the breast.

The term acephalous (akephaloi) was applied to people without heads whose facial parts such as eyes and mouth have relocated to other parts of the body, and the Blemmyes as described by Pliny or Solinus conform with this appellation.

Raleigh reported that these blemmyes lived in the same general area as the fabled city of Manoa, which the Spanish called El Dorado.

But Raleigh wasn’t the first person to “find” blemmyes in the Americas. Nearly a hundred years previously, Ottoman admiral and cartographer Piri Reis depicted a blemmye in South America (near the coast of Brazil, to be specific) on his world map of 1513. Beside the drawing, he explains, “These wild beasts attain a length of seven spans [5′ 3″]. Between their eyes there is a distance of only one span [9″]. Yet it is said, they are harmless souls.” Thus, these blemmyes are a fair bit smaller than their Old World cousins—and apparently less hostile to humans.

By the 7th or 8th century there had been composed a Letter of Pharasmenes to Hadrian, whose accounts of marvels such as bearded women (and headless men) became incorporated into later texts. This included De Rebus in Oriente mirabilibus (also known as Mirabilia), its Anglo-Saxon translation, Gervase of Tilbury’s treatise, and the Alexander legend attributed to Leo Archipresbyter .

The Latin text in the recension known as the Fermes Letter was translated verbatim in Gervase of Tilbury’s Otia Imperialia (ca. 1211) which describes a “people without heads” (“Des hommes sanz testes“) of a golden color, measuring 12 feet tall and 7 feet wide, living on an isle in the River Brisone (in Ethiopia).

The catalogue of strange peoples from Letter occur in the Anglo-Saxon Wonders of the East (translation of Mirabilia) and the Liber Monstrorum; recensions of both these works are bound in the Beowulf manuscript. The transmission is imperfect. No name is given to the headless islanders, eight feet tall in the Wonders of the East. Epiphagi (“epifugi”) is the name of the headless in Liber Monstrorum. This form derives from “epiphagos” in a modified recension of the Letter of Pharasmenes known as the Letter of Premonis to Trajan (Epistola Premonis Regis ad Trajanum).

The blemmyes or the headless people have also been illustrated and described on medieval maps. The Hereford Mappa Mundi (ca. 1300) places the “Blemee” in Ethiopia (upper Nile system), deriving its information from Solinus, perhaps via Isidore of Seville.

1) Blemee with face on chest

One Blemee standing has his face on their chest, and another below him has “eyes and mouth at their shoulders”. Both varieties of Blemmyae occur according to Isidore, who reported that in Libya, besides the Blemmyae born with a face on the chest, there were reputedly “others, born without necks, [and] have their eyes on their shoulders”. Some modern commentators believe the two different types represent the male and female blemmyes, with their genitals explicitly drawn. Another example is the Ranulf Higden map (ca. 1363), which bears an inscription regarding the headless in Ethiopia, although unaccompanied by any picture of the people. 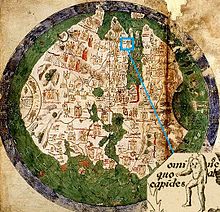 By the Late Middle Ages, world maps began to appear that located the headless people further east, in Asia, such as the Andrea Bianco map (1436) that depicted people who “all do not have heads (omines qui non abent capites)” in India, on the same peninsula as the terrestrial paradise. But other maps of the period such as the Andreas Walsperger’s map (ca. 1448) did continue to locate the headless in Ethiopia. The post-medieval map of Guillaume Le Testu (pictured above) illustrates the headless and the dog-headed cynocephali north beyond the Himalayan mountains.

The Travels of Sir John Mandeville writes of “ugly folk without heads, who have eyes in each shoulder” with their mouths “round like a horseshoe, in the middle of their chest” living among the populace in the big island of Dundeya (Andaman Islands) between India and Myanmar. In other parts of the island are headless men with eyes and mouth on their backs. This has been noted as an example of Blemmyes by commentators, though Mandeville does not use the term.

A Blemmyae from Schedel’s Nuremberg Chronicle (1493).

Examples of chapters on monstrous races (including the headless), taken from earlier sources, occur in the Buch der Natur or the Nuremberg Chronicle

The Buch der Natur (ca. 1349), written by Conrad of Megenberg, described the “people without heads (läut an haupt)” as shaggy all over the body, with “coarse hair like wild animals”, but when the printed book versions appeared, their woodcut illustrations depicted them as smooth-bodied, in contradiction to the text. Conrad lumped peoples of various geography under “wundermenschen”, and condemned such wondrous people as earning physical deformities due to the sins of their ancestors.

During the Age of Discovery, a rumor of headless men called the Ewaipanoma was reported by Sir Walter Raleigh in his Discovery of Guiana, to have been living on the banks of the Caura River. Of the story, Raleigh was “resolved it is true, because every child in the provinces of Aromaia and Canuri affirm the same”. He also cited an anonymous Spaniard’s sighting of the Ewaipanoma. Joannes de Laet, a somewhat later contemporary, dismissed the story, writing that these natives’ heads were set so close to the shoulders that some were led to believe their eyes were attached to the shoulders and the mouth to their breasts.

During the same period (around 1589–1600) another English writer, Richard Hakluyt, described a voyage by John Lok to Guinea, where he found “people without heads, called Blemines, having their eyes and mouth in their breast.” The authorship of the report is ambiguous.

The commonalities between Raleigh and Hakluyt writings might suggest the existence of an urban legend at that time, since both were English writers, writing during the same period, about trips to different continents (Africa and Latin America).

Ewaipanomas were depicted on numerous later maps using Raleigh’s account as a reference. Jodocus Hondius included them in his 1598 chart of Guyana and in a display various Amerindian peoples in a map of North America released in the same year. Cornelis Claesz, who had worked alongside Hondius on numerous occasions, reproduced this display in a 1602 map of the Americas, but modified the Ewaipanoma to possess a true head but lack a neck, setting the figure’s head at the level of the shoulders. Ewaipanomas began to decrease in popularity as a cartographic motif after this point; Hondius’ 1608 world map does not include them, but merely notes that headless men are reported in Guyana while casting doubt on the veracity of these claims. Pieter van den Keere’s 1619 world map, which includes a Claesz-like neckless figure in a display of Amerindian tribesmen, is the last to depict Ewaipanomas.