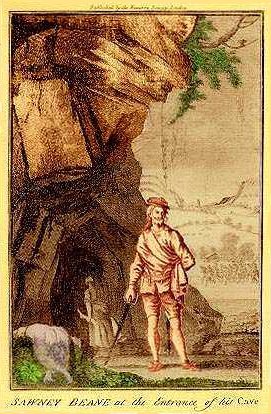 The story of Sawney Bean is one of the most gruesome Scottish legends, the plot of which would not look out of place in any modern horror/slasher movie. Evidence suggests the tale dates to the early 18th century.

Alexander Sawney Bean was – legend tells – the head of an incestuous cannibalistic family, who oversaw a 25-year reign of murder and robbery from a hidden sea cave on the Ayrshire/Galloway coast in the 15th century. The cave most readily associated with Sawney and his nefarious clan is close to Ballantrae on Bennane head in Ayrshire, although other sea caves along the Ayrshire and Galloway coast have also been associated with the story.

Alexander Sawney Bean was the head of an incestuous member cannibalistic family, who administered a 25-year reign of murder and robbery from a hidden sea cave on the Ayrshire/Galloway coast in the 15th century. The cave associated with Sawney and his nefarious clan is close to Ballantrae on Bennane head in Ayrshire, although other sea caves along the Ayrshire and Galloway coast have also been associated with the story.

There are numerous written accounts that detail Sawney and his family, and it has been suggested that the legend has its roots in real events. The tale appears in full and lurid specifics in the succinctly titled Historical and Traditional Tales Connected with the South of Scotland by John Nicholson in 1843:

“Sawney Bean was born in the late 14th century, in a small East Lothian village not ten miles from Edinburgh. He began life as a hedger and ditcher, but, being prone to idleness and inclined towards dishonesty he ran away from home with a woman who was as viciously inclined as himself. Having no means to make a living they set up home in a sea cave in Galloway supporting themselves by robbing and murdering travellers and locals, and surviving on their victim’s pickled and salted flesh. In time their family grew to an incestuous gang of 46 sons, daughters, grandsons and granddaughters. Their reign of terror did not go unnoticed: for one hundreds of people went missing over the years, and the Beans became so successful in their butchery that they cast unwanted limbs into the sea. These were washed up on distant and local beaches, much to the horror of the coastal communities. In time the areas reputation reached the ears of the authorities and, in these suspicious times, many innocent people were executed for Sawney’s crimes. The hardest hit were innkeepers as, more often than not, the missing person was last seen in an inn or lodgings: suspicion naturally falling on those who had seen them last. This happened on so many occasions that numerous innkeepers fled to take up other less risky occupations, and the area became a shunned and depopulated place.”

“Sawney’s family had by now grown very large and started to attack larger groups, although never more than they thought they could overwhelm. They were confident they would not be discovered: the cave that they had chosen had kept them well hidden from prying eyes. The tide passed right into the mouth of the cave, which went almost a mile into the cliffs. It was estimated that in their 25-year reign of terror they had killed more than a thousand men women and children. They were finally discovered by fortunate chance: A man and his wife were returning from a local fayre on horseback – the man in front with his wife behind – when they were ambushed by the Bean family. The husband put a furious struggle with his sword and pistol and managed to plough through the villainous host. Unfortunately his wife lost her balance and fell from the horse, to be instantly butchered by the female cannibals, who ripped out her entrails and started to feast on her blood. Her horrified husband fought back even harder and was lucky that 30 or so other revellers from the fayre came along the path. The Bean family made a hasty retreat back to their hideout, as the man explained to the crowd what had happened. The husband went along with the group to Glasgow, magistrates were informed, who in turn told the King, James IV, who was so enthralled with the case that he took personal charge. Equipped with bloodhounds the King and a posse of 400 men made their way to the scene of the slaughter and the hunt began.”

“The bloodhounds get all the credit for the capture of Sawney Bean: the King’s men did not notice the well-hidden cave but the dogs could not ignore the strong smell of flesh that surrounded it. The men entered the cave and found a horrible scene: dried parts of human bodies were hanging all from the roof, pickled limbs lay in barrels, and all around piles of money and trinkets from the pockets of the dead lay in piles. The Beans made no attempt to escape all were caught alive and brought to Edinburgh in chains, where they were incarcerated in the Tollbooth, and the next day taken to Leith.”

“The people were horrified when they heard about the crimes of Sawney Bean and his family and decided to give them a punishment even more barbaric. The execution was a slow one: the men bled to death after their hands and legs were cut off, and the women were burned alive after they were forced to watch the execution of the men. John Nicholson tells us about the execution as follows “…they all died without the least sign of repentance, but continued cursing and vending the most dreadful imprecations to the very last gasp of life.”

Several locals, in particular psychic detective, Tom Robinson, are convinced of the truth to the tale after witnesses described ghosts in the cave of Sawney Bean. Mr Robinson believes that instead of being executed in Edinburgh, the Sawney family were cornered and sealed alive in their cave to die a slow, agonising death. The ghosts aren’t those of Sawney and his family though, but their victims who were cursed before they were killed and eaten by the cannibalistic clan. Inside a cave, which he considered to be the Sawney home, Tom recounts how he heard a woman’s scream and saw a female form dragged into the back of the cave by 12 white lights, while a male form lay immobile on the cave floor. The images faded into the cave wall. Mr Robinson supposedly returned to the site in 1991 and performed an exorcism.

Another similar Scottish tale is that of Andrew Christie, who was a butcher, by trade, in Perth. During a great famine in the mid-1400’s Christie joined a group of scavengers in the Grampian mountains. When one of the party died of starvation, Christie put his butcher skills to work on the corpse and fed himself and the group. They now began to ambush travellers as food. Christie used a hook on a pole to haul his victims from their horse, this device was a cleke, a hook or crook, hence his nickname, Cleek. Eventually an armed force from Perth defeated the group but not before Christie fled. He was never heard from again. The name Christie Cleek was used in a bogeyman-like fashion to silence even the most unruly of kids.

No one really knows whether Sawney Bean, or Christie Cleek are fact or fiction, but theyve given rise to some well known stories such as Wes Cravens The Hills Have Eyes, which has a family of cannibals in a more modern setting. There are some stories that Tobe Hopper based his Texas Chainsaw Murder film on the Sawney Bean legend as well as the real life sadistic murderer Ed Gein.

A new documentary broadcast on Radio Scotland in 2007 concluded that the Sawney Bean myth was an English invention designed to denigrate the Scots at the time of the Jacobite rebellions. Fiona Black, a graduate of Glasgow University, told Radio Scotland’s Case Re-Opened that the word “Sawney”, which is short for Alexander, first appears in the Oxford English Dictionary in 1704 as a derogatory term for a Scotsman.

“The monstrous figure of Sawney Bean was probably an English invention.” noted Black.

Sawney Bean is often considered a mythic figure. A 2005 article by Sean Thomas[2] notes that historical documents, such as newspapers and diaries during the era when Sawney Bean was supposedly active, make no mention of ongoing disappearances of hundreds of persons. Additionally, Thomas notes inconsistencies in the stories but speculates that kernels of truth might have inspired the legend:

… from broadsheet to broadsheet, the precise dating of Sawney Bean’s reign of anthropophagic terror varies wildly: sometimes the atrocities occurred during the reign of James VI, whilst other versions claim the Beans lived centuries before. Viewed in this light, it is arguable that the Bean story may have a basis of truth but the precise dating of events has become obscured over the years. Perhaps the dating of the murders was brought forward by the editors and writer of the broadsheets, so as to make the story appear more relevant to the readership … To add to the intrigue, we do know that cannibalism was not unknown in mediæval Scotland and that Galloway was in mediæval times a very lawless place; perhaps nothing on the scale of the Bean legend took place, but every story grows and is embroidered over time.

The Sawney Beane legend closely resembles the story of Christie-Cleek, which is attested much earlier  in the early 15th century.

The legend of Sawney Bean first appeared in the British chapbooks (rumour magazines of the day), which today leads many to argue that the story was a political propaganda tool to denigrate the Scots after the Jacobite Rebellions. 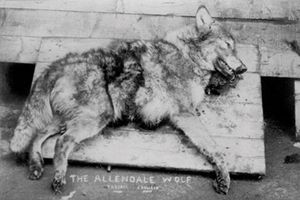 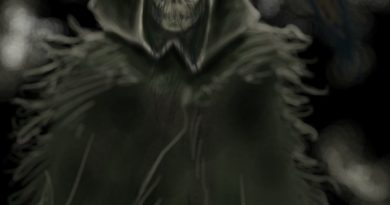 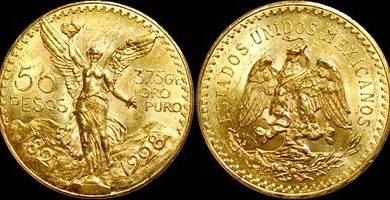